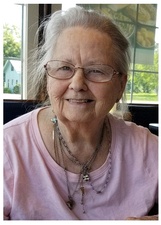 Virginia Marie Ketola “Ginny” Harvey, 94, of Cairo, GA, passed away at her home on Saturday, November 20, 2021.  The family will have a memorial service at a later date.

Mrs. Harvey was born on November 14, 1927, in Newberry, MI, to the late Emil Ketola and Pauline Swisher Ketola.  She was married to Edwin Donald Harvey, Sr., who preceded her in death.  She retired as a pharmacy technical assistant.