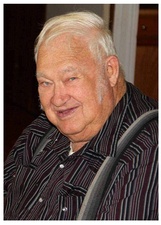 Mr. Davis was born on September 10, 1934, in the Pumphrey Settlement in south Grady County, GA, to the late Richard E. Davis and Mary Louise Vick Davis.  He attended Reno School and at the age of 18, he joined the Army.  Shortly there after he married the love of his life, Hazel Lowe of Concord, FL.  After leaving the military he moved to Florida where he worked and raised his family.  The week of his forty-fifth birthday, he decided to come home to stay in Grady County.  He worked for Winstead Plantation until he retired in 1991.  He loved to fish and spent hundred of hours on Lake Seminole.

He was preceded in death by: his wife of 61 years, Hazel Davis; his parents, Richard and Louise Davis; and his brother, Virgil Davis.