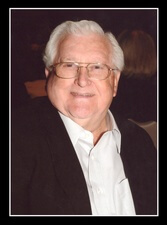 Funeral services for Kenneth Gresham James, 83, of Cairo, GA, are at 11:00 a.m., Thursday, August 13, 2015, at the First United Methodist Church, Cairo, GA. Rev. Whit Byram and Rev. Ron McCaskill will officiate. Services will conclude at the Church. Private interment will be in the Cairo Cemetery, Cairo, GA. Mr. James passed away at his home in Grady County, GA, on Sunday, August 9, 2015.

Kenneth Gresham James was born on September 10, 1931, in Cairo, GA, to the late Walter Wilder James and Cecil Ferrell James. On April 25, 2004, he married Dorothy Moses James, who survives. He served his country in the U. S. Air Force. He owned and operated James and Sons Nursery. He was a member of Cairo Kiwanis, 60 year member of the Cairo Masonic Lodge. He held an active role in Gideon International, Cairo Grady Camp. He was a devoted member of the Cairo First United Methodist Church and was a member of the Burleigh Law Sunday School Class. Through the years, Kenneth has held many offices within the church that he dearly loved.

He was preceded in death by his parents and his first wife, Beverly Guptill James.