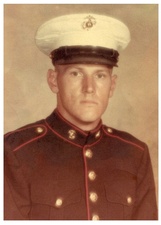 Mr. McMurtury was born on March 30, 1942, in Newberry, SC, to the late Henry Valentine McMurtury and Mamie Estelle Chapman McMurtury.  He served his country in the Unites States Marines.  On August 22, 1969, he married Judy Maxine Cooper McMurtury, who survives.  He was a Dairy Farm manager for Johnsons Ranch until his retirement.  He was a member of Vineyard Ministries of Cairo.  Mr. McMurtury loved gardening and the Lord.