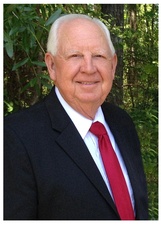 Mr. Knight was born on December 21, 1934, in Whigham, GA, to the late Melvin Jack Knight, Sr. and Lucille Maxwell Knight.  He proudly served his country in the United States Army.  On April 6, 1957, he married Doris Faircloth Knight, who survives, recently celebrating 65 years of marriage.  He was self-employed as a farmer and well-respected in the agricultural community. He and his wife were named Farm Family of the Year in 1983 and he received many agricultural yield awards for crop performance over the years.  Winburn was a faithful member of Tired Creek Primitive Baptist Church in Whigham and served as a Deacon for over forty years. He served on the Cairo Banking Company Board of Directors for over ten years, was a longstanding and devoted Trustee of Wayside Community Club, and a member of the Whigham Community Club.

He was preceded in death by: his parents; grandson, Tyler Knight; brother, Melvin Knight, Jr. and a sister, Christine Whigham.

The family will receive friends in the Fellowship Hall of Tired Creek Primitive Baptist Church immediately following the funeral and graveside service.