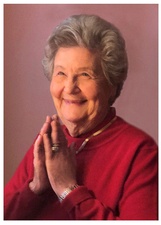 Funeral services for Sara Ellen Thomas, 90, of Thomasville, GA, formerly of Cairo, are at 11:00 a.m., Thursday, December 12, 2019, at the First Baptist Church, Cairo, GA. Rev. Chris Allen will officiate. Services will conclude at the church. Private interment will be in Sunset Memorial Gardens, Thomasville, GA. Mrs. Thomas passed away at Archbold Memorial Hospital in Thomasville, GA, on Monday, December 9, 2019.

Mrs. Thomas was born on December 12, 1928, in Cairo, GA, to the late Edgar Thomas Robinson and Jewell Harrison Robinson. On January 7, 1949, she married William Estus “Billy” Thomas, Jr., who preceded her in death on August 26, 2017. They were married for 68 years. Many brides in the surrounding area were the recipients of her talents as she served as wedding coordinator, director and caterer for many years. Sara was a devoted member of the First Baptist Church of Cairo since 1952. She served on various church boards and committees, served as Vacation Bible School Director for many years and taught children’s Sunday School. She was a member of the First Baptist Church WMU and seniors Joy Club. She was a long-standing member of Cairo Woman’s Club having served on virtually every committee and was President for several years. In 2001, Sara was honored as a recipient of the Georgia Gracious Ladies. She was active in all facets of her girls’ lives with school and social functions while they were in school and continued that with her grandchildren and most recently with her great-grandchildren. With Sara’s and Billy’s involvement in their grandchildren and great-grandchildren’s lives, she was affectionately known by many as “Mimi.”

She was preceded in death by: her parents; her husband; brothers and sisters-in-law, Tommy Robinson and Ruby, Dewey Robinson and Joyce.