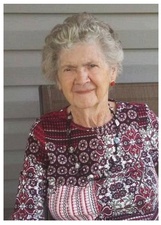 Private funeral services for Patricia Doreen “Pat” Tillery, 84, of Climax, GA, will be held at the Chapel of Clark Funeral Home, Cairo, GA. Rev. Kenneth Cloud will officiate. Private interment will be in Midway Baptist Church Cemetery, Cairo, GA. Mrs. Tillery passed away at Bainbridge Health and Rehab in Bainbridge, GA, on Saturday, May 23, 2020.

Mrs. Tillery was born on February 16, 1936, in Belfast, Ireland, to the late David Hood and Dora McCullough Hood. On July 2, 1956, she married Howard Coy Tillery, who preceded her in death on April 11, 2016. She was the secretary at Cairo Realty for many years until her retirement. Pat served several years as the secretary to the Southwest Board of Realtors. She was a member of the Climax Baptist Church. Her most important responsibility was being a pastor’s wife for over 60 years of service to church families.

She was preceded in death by: her parents; husband; brother, Paul Hood; and a sister, Eileen Hurst.

In lieu of flowers, memorials may be made in Mrs. Tillery’s memory to: Gideons International. Online Donations