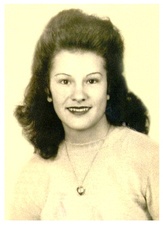 Ouida was born and raised in the Cairo, Georgia area where she graduated from Cairo High School. As a young woman she worked for Southern Bell as an operator and was praised by co-workers for being the company’s best long-distance operator. She daringly took a job with the company and moved to Atlanta, Georgia where she met and married the father of her four son’s Michael, Nick, Steele and Jeff. She loved her boys and her family dearly, and they her.

Ouida had a great sense of humor and loved dressing “smartly” in bright colors and fashionable styles. Sadly, at age 27, Ouida was struck by a devastating illness that robbed her of her freedom and independence. Yet, through it all, she always thought about her sons and asked all who visited her about her boys, her sisters, and other relatives.