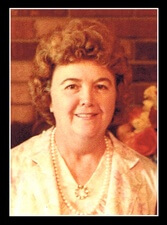 Funeral services for Nona Lee Hickox, 83, of Cairo, GA, are at 11:00 a.m., Wednesday, September 9, 2015, at Gatlin Creek Baptist Church, Thomasville, GA. Rev. Don Prevatt will officiate. Services will conclude at the church. Interment will be in the Ochlocknee City Cemetery. Mrs. Hickox passed away at the Presbyterian Home and Retirement Community in Quitman, GA, on Sunday, September 6, 2015.

Nona Lee Hickox was born on January 10, 1932, in Lumber City, GA, to the late Leroy Carpenter and Catherine Varnadoe Carpenter. After accepting the Lord at an early age, Nona strived to live for Him all of her days. While her parents worked, she raised her four younger sisters, often reading to them and teaching Sunday school lessons. After meeting the love of her life, Lawton Albert Hickox, in Lakeland, FL, they married on March 6, 1948, and moved to Georgia to begin their lives together. Lawton preceded her in death on May 27, 2014. She was an avid reader, a gardener, and a superb cook. Above all she was a Godly wife, mother and grandmother. She and her husband were founding members of Gatlin Creek Baptist Church in Thomasville, GA.

She was preceded in death by: her parents; her husband; and sisters, Edna Wells, Irene Cason.