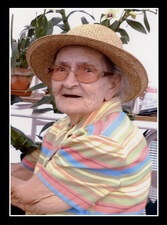 Funeral services for Mary Alice Cooper, 90, formerly a resident of Cairo, GA, are at 2:00 p.m., Wednesday, August 5, 2015, at the Chapel of Clark Funeral Home, Cairo, GA. Rev. Ron McCaskill will officiate. Interment will be in Greenwood Cemetery, Cairo, GA. Mrs. Cooper passed away at Lake Park of Madison in Madison, FL, on Saturday, August 1, 2015.

Mary Alice Cooper was born on February 13, 1925, in Thomasville, GA, to the late George Alexander Sowell and Ada Hampton Sowell. On November 11, 1942, she married Arthur Russell Cooper, Sr., who preceded her in death on June 28, 1980. She was a seamstress with Grady County Mills which later became Ithaca Industries. After her retirement, she grew orchids, which was her passion. She was a loving wife, mother and grandmother – a wonderful lady who will be missed by her family and friends. She was of the Baptist faith.

Please enter your information and condolence message. The condolence you submit is private and will only be used to forward to the family.