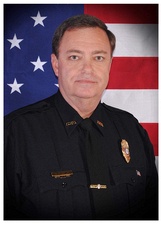 Keith was born in Orlando, FL, to the late Keith Parlon Sandefur, Sr. and Freida Lou Strickland Sandefur. He had proudly served the City of Cairo Police Department for over 40 years, 23 years of this service as Chief. He touched the lives of many and will always be remembered for his big heart. Keith fulfilled his dream of attending the FBI Academy in Quantico, VA. Keith never turned his back on anyone and was known for his smile and big wave as he walked the streets of Cairo. He was known for his open door and words of wisdom and guidance. Keith has left a legacy and will be missed by all.