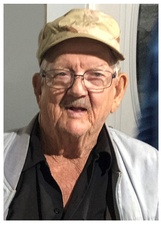 His grandsons will be pallbearers.

Mr. Ansley was born on December 2, 1935, in Spence, GA, to the late William Israel Ansley and Margaret Annette Carroll Ansley.  On March 16, 1961, he married Bonnie Jean Britton Ansley, who preceded him in death on October 30, 2014.  After they were married, they lived in Ohio and he worked in the steel factory.  Later he moved back to his home in Spence, Georgia.  He was a lifetime farmer and of the Christian faith.

Mr. Ansley was a very loving devoted family man.  His family was the most important thing in his life.  His favorite pastime was riding his grandchildren on his John Deere lawn mower.  He enjoyed fishing, hunting and his gun collecting.  He enjoyed farming, raising cattle, hogs and growing tomatoes.  He enjoyed living life to the fullest.