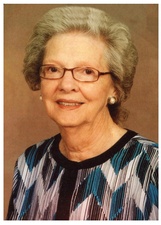 In 1947, while still a teenager, Mrs. Williams began working as a telephone operator with Southern Bell Corporation. She saw the potential for advancement within this company and worked diligently to learn new skills that would enable her to be competitive in a male dominated industry. She was a pioneer, paving the way for future generations of women to pursue a career without being limited by their gender. Her final role with Southern Bell was Management Executive which she held until her retirement in 1983. Having been born during The Great Depression, she took great pride in utilizing a strong work ethic and frugality to establish independent financial stability.

She was a member of the Cairo First United Methodist Church.

She was preceded in death by: her parents; her husband; and her son-in-law, TD David.

In lieu of flowers, memorials may be made in Mrs. Williams’ memory to The TD David Memorial Scholarship, United National Bank in c/o Sylvia Ferguson, P. O. Box 150, Cairo, Georgia 39828.