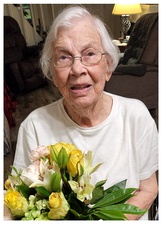 Mrs. Butler was born on July 10, 1928, in Cairo, GA, to the late Marvin Cliett and Arrie Gatsie Whitaker Cliett.  On September 4, 1944, she married Aaron Butler, Jr., who preceded her in death on January 15, 2014.  She worked as a reception and bookkeeper in her earlier years and later was a devoted homemaker.   She was a member of the Tired Creek Primitive Baptist Church.

She was preceded in death by: her parents; her husband; daughter, Bonnie Jean Butler Broome; and her brother, Henry Lee Cliett.

The family would extend their heartfelt gratitude for the love and care of Katie, Jessica, Lorrie, and Anna from Agape Hospice in Vidalia, GA.