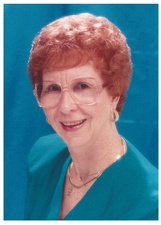 Ethel “Candy” Cornelia Pritchett Vawryk, 89 of Melbourne, Florida went to meet her Heavenly Father, in the early morning of November 15, 2022.

She was born in Cairo, Georgia on December 2, 1932, to the late James A. “Red” Pritchett and Daisy Belle Pritchett.  Candy graduated from Cairo High School in 1950 and went on to Perry Business School in Albany, Georgia.  She worked at W. B. Roddenbery Company on the pickle packing line and Grady Motors as a bookkeeper.  She moved to Orlando, Florida and worked for McInerney Ford in the title division.  While living in Orlando, she met the love of her life and soulmate, Airman First Class Alex A. Vawryk.  They were married on June 18, 1960.  She made their first home in Longwood, Florida and they soon started their family.  The family moved around the south following the job opportunities available.  The family was then called to Stamford, Connecticut and lived there for a year until having enough of the cold and snow, they moved back to the Sunshine State and planted their roots on Florida’s Space Coast for the rest of their lives.  She traveled extensively around the country with her husband while he worked on rebuilding the U.S. Air Traffic Control system.  She was known for her love of the Florida Gators, she was quick to let you know that she got to meet the legendary Gator quarterback, Tim Tebow.  Once she became a proud granny, she was active with her grandchildren taking every opportunity to be involved in their lives and achievements. She was a loving daughter, sister, aunt, mother and grandmother who touched the lives of many throughout the years.

She was an active member of Ascension Catholic Church. Over the years, she had many volunteering opportunities including: Indian River Players (local theater group), Ascension Catholic School; Roy Allen Elementary School PTA, where she was awarded the Silver Apple Award for her gracious gifts; Cub Scouts and Boy Scouts of America; Central Junior High School and was immensely involved with Eau Gallie High School Marching Commodore Band, being a band mother to all.

She is survived by her loving husband Alex of 62 years, sons, Tim (Liz) Vawryk of Louisville, KY; Christopher Vawryk of Orlando, FL; her grandchildren, her pride and joy, Peter Vawryk of Bowling Green, KY, Laura Vawryk and Amy Vawryk both of Louisville, KY; her brother Tom (Shirley) Pritchett of Moultrie, GA.  She was preceded in death by her parents, sister Sybil Pritchett Peters and brother-in-law Fred Peters.

Memorial services will be held Friday, November 25, 2022 at 2:00 p.m. at the Clark Funeral Home Chapel, 334 South Broad Street, Cairo, GA. The family will receive friends directly after the service at the funeral home.

In lieu of flowers, the family requests that donations be made to the donor’s favorite charity in her honor.

Anyone wishing to send the family a message or share a story is asked to visit Candy’s memorial page at www.clarkfuneral.com.

For those unable to attend the service, a recorded video will be available for viewing at www.youtube.com/@tvawryk1786.