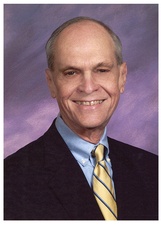 Edgar Bussey Smith, III, 79, of Cairo, GA, passed away at his home on Tuesday, October 6, 2020.  A private memorial service has been scheduled for the family.

Mr. Smith was born on June 3, 1941, in McRae, GA, to the late Edgar B. Smith, Jr. and Nellie Clare Woodle Smith.  He graduated from the University of Georgia, where he was a member of Sigma Chi fraternity, and successfully completed coursework from numerous banking schools. On October 5, 1968, he married Joy Burgess Smith, a union which spanned 52 years.

The Smiths moved to Cairo in 1992 when he was employed as the president of Cairo Banking Company, later Ameris Bank. Mr. Smith began his career as a bank examiner with the Georgia Department of Banking and Finance. Over the years, he served as the president of a number of financial institutions in Georgia. He concluded his 53 year career as president of the former Citizens Bank of Cairo.

Mr. Smith was a devoted church member in all of the communities where he lived, and sang in church choirs for over 50 years, including in the Chancel Choir of the Cairo First United Methodist Church where he and Mrs. Smith have been active members since moving to Cairo. In Cairo, Mr. Smith was a member of the Burleigh Law Sunday School Class and former member of the church’s finance committee. He was also active in civic affairs and was one of the original members of the Grady County Lake Authority.

Mr. Smith was an avid Georgia Bulldog fan, Rotarian and talented home chef. He was an Eagle Scout, a fine story teller and everyone enjoyed his dry wit.  When asked if he would go somewhere, he always responded, “I think I’ll be busy.” He was admired and respected in his communities as an “old testament banker.” A consummate family man, he and Joy hosted a family beach trip each summer for 30 years.

He was preceded in death by his parents and his father-in-law, James Herbert “Stoney” Burgess.

Memorials may be made in Mr. Smith’s memory to: Cairo First United Methodist Church’s sanctuary renovation project or Hospice of Southwest Georgia.