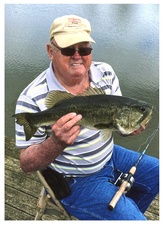 Mr. Lodge was born on June 17, 1938, in Whigham, GA, to the late Willie Green Lodge and Ruby Barfield Lodge. He served his country in the United States Air Force. Dwight was a retired truck driver for McKee Baking Company. On March 6, 2009, he married Faye Jordan Lodge, who survives. He was of the Methodist faith.

He was preceded in death by: his parents; his first wife, Sarah Frances Wheeler Lodge, who preceded him in death on September 18, 2006; and five brothers and three sisters.