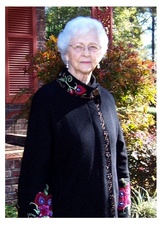 Funeral services for Dorothy Newberry Gainous, 90, of Cairo, GA, are at 11:00 a.m., Saturday, July 23, 2022, at the Chapel of Clark Funeral Home, Cairo, GA.  Rev. Sam Vernon will officiate.  Services will conclude at the chapel.  Private interment will be in Spring Hill United Methodist Church Cemetery.  Mrs. Gainous passed away at her home on Wednesday, July 20, 2022.

Mrs. Gainous was born on November 22, 1931, in Whigham, GA, to the late Paul H.  Newberry and Myrtle Harrell Newberry.  On July 5, 1949, she married Larry Benson Gainous, who preceded her in death on May 6, 2021.  She was employed as a secretary with several location over the years.  After attending Perry Business School, Albany, GA, she began her career with Campbell Soup Company in Cairo and later worked with the Cairo Public Library with “Miss” Wessie.  When her husband, Larry was attending different colleges in his educational pursuit, she worked with the University Experiment Station of UGA while living in Tifton and Athens.  Later she worked with Container Corporation of America in Fernandina Beach, FL.   After moving to Jesup, GA, she worked with the Department of Transportation until she retired, and they moved back to Cairo.  Dorothy was a member of the First United Methodist Church of Cairo.

She was preceded in death by: her parents; her husband; and a granddaughter, Leslie Lynne Wilcher.