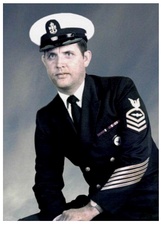 Private graveside funeral services for Clyde Clarence Orender, Jr., 87, of Cairo, GA, will be in Forest Lawn Cemetery, Cairo, GA. Rev. Bill Staten will officiate. A memorial service will be planned for a later date. Mr. Orender passed away at his home in Cairo, GA, on Friday, May 8, 2020.

Mr. Orender was born on July 26, 1932, in Calhoun, LA, to the late Clyde Clarence Orender, Sr. and Jewel Mae Neighbors Orender. He served his country as a Chief Petty Officer in the United States Navy for over 23 years. On April 8th, 1952, Clyde married the love of his life Deloris Joy Wade Orender. They shared 68 years of Christian marriage. He loved his wife and family deeply. His great delight was to watch his grandchildren and great-grandchildren play. He loved his church family, Faith Christian Center, as well, and enjoyed the many times of fellowship they spent together. He had many hobbies, but making musical instruments topped them all. He was known for the many stringed instruments that he made, most of all, violins.

He was preceded in death by: his parents; sisters, Juanita McClain, Betty Muhleisen; and a brother, Melvin Orender.