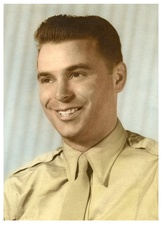 Private graveside funeral services for Richard Melvin Stewart, 95, of Albany, GA, will be at Greenwood Cemetery, Cairo, GA. John Jackson will officiate. Military Honors will be presented at the service. Mr. Stewart passed away at his home in Albany, GA, on Sunday, June 14, 2020.

Mr. Stewart was born on October 26, 1924, in Shellman, GA, to the late Earnest Earl Stewart and Mattie Achord Stewart. He served his country in the United States Army. On July 11, 1952, he married Ruth Varnadore Stewart, who survives. They were married for almost 68 years. He worked with Thurston Motor Lines until his retirement. He was active in the Albany Civitan Club having served as past President and an active member of the Elks Lodge No. 713, where he was past Exalted Ruler. He was a devoted member of the Porterfield Memorial United Methodist Church in Albany, GA.