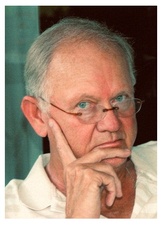 Wyman Haskell Richter, Jr., 81 died at his residence on October 8, 2020.  He was born on July 5, 1939 at the “old home place” on Broad Street in Cairo, Georgia to Wyman H. Richter, Sr. and Louisa Ledford Richter.  He was an honor graduate of Cairo High School’s class of 1957, the first class to graduate in the new high school, and he loved playing saxophone in “Major” Verran’s band.  After joining the United States Air Force and fulfilling his military obligation, Wyman moved to Atlanta, Georgia where he worked during the day and attended Georgia State University at night.  He was a member of Pi Kappa Alpha social fraternity, Beta Alpha Psi professional fraternity, and Blue Key Honor Society.

As a young intern in the accounting department at United Airlines in Atlanta, he met the love of his life, Virginia Anne Jernigan, who worked in reservations.  After only six months of dating, they married at First Baptist Church of Atlanta in 1962.  They later became the proud parents of four children:  Harriet Anne, Meridith Anne, Wyman Haskell III, and Leigh Ledford.

After his graduation in 1963, Wyman began working for the Davis and Freeman accounting firm in Cairo.  As he honed his talents in accounting and expanded his business relationships, Wyman developed a client base that stretched from Naples, Florida to Ithaca, New York and participated in transactions that took him all around the world.  Due to his command of tax law, one of his New York clients even referred to him as “the best kept secret in south Georgia.”   He was a Certified Public Accountant for 40 years and the founder of the firm, Richter & Company.  He was a member of the American Institute of CPA’s, the Georgia Society of CPA’s, the Florida Institute of CPA’s, and the Tallahassee Regional Estate Planning Council.  He was also a Certified Financial Planner and Registered Investment Advisor.  In addition to his accounting practice, he was a founder and director of United National Bank, which was built on the property where his childhood home once stood.

With a deep love for Cairo and its people, he served various organizations in his community throughout his life.  Some of these include Cairo-Grady Chamber of Commerce-director and president, Cairo Country Club-member and director, Roddenbery Memorial Library-trustee, Brookwood School-director and chairman of the board, Rotary Club-member, and the Davis Memorial Fund-trustee.  He was generous with his time and enjoyed acting as mentor and trusted advisor for those who sought his counsel.

As the great-grandson of a minister who was one of the founders of the First Baptist Church of Cairo, Wyman grew up in the Baptist faith and served the church as a Sunday school teacher, trustee, deacon, and chairman of the finance committee.  Later, he became a member of Cairo First United Methodist Church where he also served as chairman of the finance committee.  His life was a testament to his faith.

Wyman enjoyed hunting, fishing, golf, music, reading, exercising, college football, annual class reunions, afternoons at the coffee shop, spending time in Crystal River, and anything he could do with his four grandchildren.  More than anything, he enjoyed his family and friends.  He will be greatly missed.