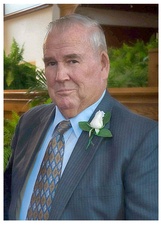 Funeral services for William Chesley “Willie” Godwin, 80, of Cairo, GA, are at 3:00 p.m., Monday, February 10, 2020, at the Chapel of Clark Funeral Home, Cairo, GA. Rev. Jason Bennett will officiate. Interment will be in Greenwood Cemetery, Cairo, GA. Jarred Robinson and Justin Robinson will speak at the graveside. Mr. Godwin passed away at his home in Cairo, GA, on Saturday, February 8, 2020.

Mr. Godwin was born on February 1, 1940, in Climax, GA, to the late Charles Clowers Godwin and Essie Mae Ritter Godwin. On April 25, 1959, he married Elizabeth Hawthorn Godwin, who survives. They were married for 60 years. He was the owner and operator of Godwin’s Garage in Cairo for many years. He never met a stranger and was a friend to all. Willie loved his wife, his girls, his grandkids and all his family. He was a member of Gordon Heights Baptist Church.

The family wants to extend a special thank you to his caregivers, Janet Washington, Nikki Hicks and special friends, Jordan and Eric Smith, Connie Lee.