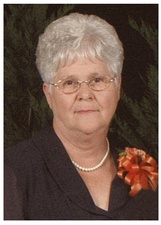 Mrs. Mobley was born on February 14, 1941, in Cairo, GA, to the late Roy Lee Pyles and Lorene Johnson Pyles.  On January 14, 1955, she married Henry McGuire, who preceded her in death on July 8, 1994.  She was a seamstress with Ithaca Industries, Inc.  She was a member of the Cairo Church of the Nazarene.

She was preceded in death by: her parents; husband; sister, Dorothy Hurst; and a step-father, John Campbell.